In the winter of 1945 towards the end of the Second World War, Wolfgang Voss was injured in the trenches after being hit by shrapnel in his hip during combat with US soldiers in the Schnee Eifel region. A medic from his troop promised to come and pick him up at night, but he never showed up again. Instead, Wolfgang Voss was awakened the next morning by American soldiers, whom he barely managed to crawl towards before they bombed his hiding place with a hand grenade. Wolfgang Voss surrendered and was taken prisoner of war. This was February 1945. He was 18 years old.

He spent the next four years in several camps in England, French North Africa and France. In a document which he received from the GRC Tracing Service in 2019, the stations where he was held as a prisoner of war are handwritten.

Commenting on his years as a prisoner of war, Wolfgang Voss says that they left a mark on him, but did not break him. Fortunately, he was still young at the time and was able to endure hunger, thirst, vermin infestation and inhuman treatment more easily than some of the older prisoners, many of whom he saw capitulate inwardly. But Wolfgang Voss, too, had meanwhile given up hope of ever being able to return home again.

“My youth was taken away from me”, says Wolfgang Voss. “I grew up under Adolf Hitler and until I came out of captivity, I knew nothing else. Of course, I would have preferred it not to have happened. My son says it is possible to start a second life. And I have confidence it may yet still happen,” he says with a wink, now 93 years old.

In March 1949 Wolfgang Voss was released and returned to his hometown of Berlin. Only his mother still lived there, but he did not bear living with her for long. After all these years of captivity, he was seized by a “great restlessness”, as he describes it, which would continue to haunt him for many decades to come.

His professional career took him to southern Germany, where he worked as a telecommunications technician and where he still lives today. He was married three times and has two sons. In his small flat in Ravensburg, where he is still completely self-sufficient despite his old age, he has finally found peace and quiet. Here he enjoys his sunset years.

Thanks to the GRC Tracing Service’s certificate stating his captivity as a prisoner of war, he receives a monthly compensation of 40 euros from the Federal Office of Administration in accordance with the law on the Heimkehrerstiftung, Foundation for Former Prisoners of War.

“That is a huge help,” says Wolfgang Voss. “I no longer have to turn over every cent but can spend it three times before I have to turn it over.” 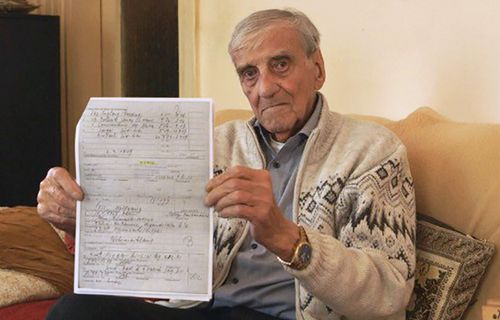